They’re out to save friends from hordes of evil Glitches that have invaded, luring them into spike-invested volcanoes, navigating perilous traps and coding their way to victory.

But the fun doesn’t stop there – Kids use the coding skills learnt in the game to build their very own planets to challenge mates. Code unleashes creativity in a whole new way, allowing the Code Kingdoms universe to take on a whole life of its own. If your kids aren’t already playing you’re missing out!

I met with co-founders Hugh and Ross who explained more.

“Before we met, Ross and I were teaching programming in our separate ways: Ross was in schools with Intel while I was helping my 8 year old brother learn coding. He was obsessed with Minecraft at the time so I started building a game in a similar style so he could code in a creative environment he truly loved.”

The pair has been meticulous in producing a gender-neutral design that appeals to kids aged 6-13. They code cute animals, pesky Glitches and other interactive objects in levels to make exciting challenges for their friends – all with an intuitive drag-and-drop JavaScript interface that develops with the kids as they get more confident about coding. 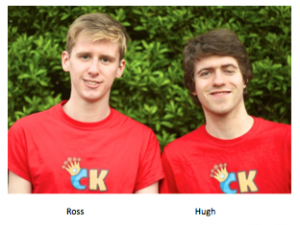 Ross and Hugh joined the startup incubator Entrepreneur First, a prestigious programme who last year produced the likes of AdBrain and Prizeo. They teach ‘The Lean Startup’, a methodology for producing tech companies by solving a problem with a product.

The problem Code Kingdoms is solving is the lack of fun and creative coding resources for kids.

“When Ross and I met he took one look at the prototype and jumped into action. He knew this was exactly what children wanted from his time teaching coding. Within a couple weeks we were working together and back in schools testing the first prototype with kids.

In September 2014 coding is being made compulsory in primary schools across the UK – not only is Code Kingdoms free online and the app store but they also produce free curriculum materials for schools.

“We’re now looking to expand in to homes and schools internationally. Coding is something that every kid should know; it’s the most empowering skill in the 21st Century.”

They’ve captured the imagination of kids, parents and teachers across the country.

“I feel we will be stuck with this game for quite some time” Lee, parent of 2

Reflections of a teacher on GBL in education

HOW TO ADAPT YOUR WHOLE SCHOOL ICT CURRICULUM