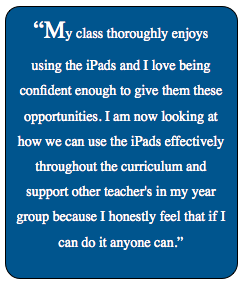 Just before Christmas 2012, I was presented with an iPad. I was told to take it home over the holidays and practice using it because next term I would be using it to support some of the children in my class. At first I was extremely excited and it resulted in me going out the very next day and purchasing a little Christmas present to myself…… the iPhone 5. That evening whilst attempting to set up and get to grips with my new phone it dawned upon me that my ICT skills left much to be desired.

This led me to reflect upon my own experiences with technology. My parents always wanted me to be technology lingual. I remember when my father brought home our very first computer a Commodore Amiga 500. I spent hours playing ‘Back to the Future’ and ‘Bubble Bobble’. Over a number of Christmas’s my sister and I received Game Boys, a Sega Mega Drive and a Nintendo 64 and I remember playing ‘Super Mario’. I have bought myself a laptop, a Wii (which only comes out at Christmas, New Year and whenever the family get together), a Play Station and a baby pink DS Lite. My thoughts then spread to the mobile phones that I had used and the development from personal tape player to personal CD player and most recently the iPod that was my daily companion whilst travelling around the world for seven months.

I know you must be thinking, why is she telling us about her life experiences when what I want to know is about how I could use iPads within the classroom, but I shall reach my point shortly. For me each piece of technology was a fad, something I wanted because it was what everyone wanted, the latest craze. My knowledge of how they all worked was very limited and often my use of these products was for a very limited time. I lost interest very quickly whereas my sisters persevered. I had to ask myself why this had become a repetitive pattern in my life. The answers were because I often became confused, I didn’t give myself time to experiment with new things and I was a little bit scared of breaking it by pressing the wrong button.

The iPad that was sat in my handbag suddenly became quite a daunting piece of equipment, something that I had been given that I would have to learn how to use effectively and most importantly become confident with. It dawned upon me that receiving this iPad would change my whole way of thinking about technology, both within my professional and personal life. However, here I am over six months later typing this very article on that ever so worrisome iPad that has changed the way I teach, plan and assess. Initially I was given the iPad to support SEN children within my class and I have focused upon this area within this article.

Initially I looked for books that were child friendly and would encourage children to read on a regular basis. We now have a number of books available for children where they can have the story read to them, or read with the iPad, they are also able to record their own voices reading the story. These books allow the children to read independently but still have support when they feel they need it. For one child an IEP Target related to her use of vocabulary and ability to discuss objects and pictures. I downloaded an app called ‘WIld Friends’ created by Fotopedia which allows you access to thousands of beautiful pictures of animals. It has lead to many interesting discussions about the pictures she does and does not like and importantly she is encouraged to express her opinions about them. Also, she is now able to explain and identify what is similar and different about the animals. The ‘Toca Monsters’ app helps to encourage discussions about food and helps you to address issues with food that children may have; for example why people like or dislike certain types of food, how to cook food and why it is important to eat our lunches etc. This was particularly supportive tool when covering the Science topic ‘Healthy Eating’ and next year I will be using it to support EAL learners within the class to introduce key vocabulary for the unit.

To support children with weak writing skills I have recently used the ‘Toontastic’ app. This is an app that allows you to create a cartoon following a very simple set of instructions which are both written and spoken. The children have a choice of characters and settings which I then encouraged them to plan and create a story about. To create their story the children then manipulated the characters around the screen and recorded their voices for each character. This app was particularly supportive for children who are EAL as it took away the ‘writing’ aspect of story writing and allowed them be creative orally, which lead to spontaneous creativity. What I found using this app is that even though I had used and practiced using this app prior to the lesson, the children’s inhibitions and willingness to experiment meant that they soon exceeded my knowledge.

There are a number of games that support and help develop key skills for learners. I have used simple matching games such as ‘Touch then Match’ and simple puzzles that are aimed at young children and were ideal for particular children within my class. I have also found that playing games and just using the iPads regularly has helped to develop the children’s fine motor skills. Having to manoeuvre and manipulate images on the screen has resulted in better pencil grip and neater handwriting.

Having had regular sessions with iPads I have also noticed a boost in confidence for many of my children. A dyslexic child in my class found it very difficult to begin any task independently and needed reassurance throughout every lesson. When they were first introduced to the iPads he reacted in the same way. However, a few weeks later he was happy to try any new activity on the iPad independently and now feels confident to experiment and find out solutions for himself. Last week he taught me how to use ‘Minecraft’ a complex building game, and was extremely supportive when I became confused and needed help. This has had a positive effect upon him in other lessons too where he now enjoys the challenge of working independently.

The iPad has also become a key assessment tool within my classroom and practice. In any lesson I can quickly take pictures of what the children are doing or have achieved. I am able to record group and class discussions quickly and can reflect upon them when evaluating my lessons. Particularly within PE and Music sessions you can record the children and have them immediately evaluate their own work and identify their own next steps to make an impact upon their progression. Stories, cartoons, films etc that the children create can be downloaded and watched by all, giving them a greater purpose for the work that they are generating. The TA’s and other adults who support during lessons are also able to use this technology, which ensures I can assess my class’s progress more thoroughly.

Machineers: What makes a good learning game? by Henrike Lode