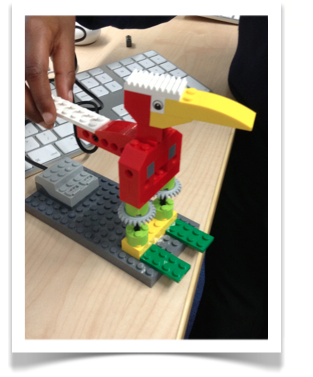 As a child I spent many hours sitting and building creations out of Lego. As a parent I have spent hours helping build or just watching my children play. Lego can bring out the inner child in us, it is often the one toy as adults we have the urge to pick up and start to play. So when looking at planning ICT to be told we have Lego WeDo sets (not only Lego but it also connects to the computer!), I have to say my inner child was a little excited.

After a trial run at home, I managed to build a crocodile and use the software to control movements of the mouth. The software came with the set and could print off a large document with instructions. After several attempt to read and follow, I discovered that plug it in and play around was much more fun. I was ready to go and unleash 30 year 4 children on the sets.

We have enough sets that the children could work in pairs. Sets were handed out and children shown how to locate the instructions to build, and command software on the system. Then I let them play. At first it was clear that many were not regular Lego builders. As I observed and assisted in building, I was able to assess skills in transferring a two dimensional image into an actual three dimensional model. At first there were questions, “Is this the right bit?” or “Does it go there?” This got the response “I don’t know. How we can check?”

Lesson 1 only two pairs completed an activity, and that was just building. However, over the weeks their building skills rapidly improved and they developed ways of describing which bricks they needed. Some of the tasks were more complicated than others. Some had a series of cogs and belts to control movement, which meant that one slight error and their model would not work. We discussed the need for cogs to link together. The children rapidly dismantled and rebuilt their models to solve these engineering issues.

The software which I initially found baffling, but the children were able to  play with just a basic instruction. They quickly became able to complete a series of commands. As they continued to try different commands they could create a series of movements. The children were not only supportive with their partner but would quickly support other pairs to teach their new found skills. The class worked collaboratively with each other and simply enjoyed ‘playing with Lego’.

Last week I attended a training session on coding. A little nervous, as I have never experienced coding before (not sure I knew what coding was). Yet my initially worries were soon diminished as the software (scratch) was almost the same as the Lego. The skills I had built up with the class were transferable to another programme. As the ICT curriculum is moving towards computing and ensuring children have skills in programming.  Why not start them off just playing with Lego?