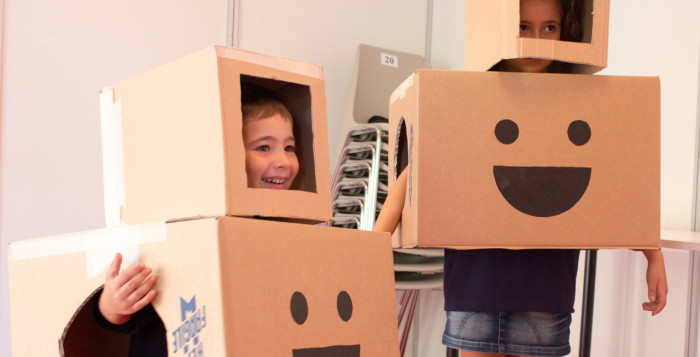 The focus on teaching children programming skills is growing every day. There are many tools that have been designed to support children to develop their logical thinking and problem solving skills. We talked to Filippo Jacob and Matteo Loglio, the founders of Primo, wooden programming blocks, designed to teach logical thinking to children aged 3-7 and asked them about their journey.

How did your story begin?
In early 2013 myself and my co-founder Matteo Loglio decided to create a company with the intention of designing and producing products to help children and novices learn, play, and create with technology. This is how Primo as a company came to be. Myself, Filippo Yacob, and Matteo are both creatives and technologists and we know that in order to be creative and express oneself, technology is incredibly important. 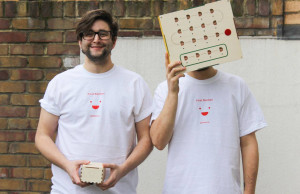 The first product we worked on if the Cubetto Playset, a tangible interface designed to introduce programming logic to little children (3 to 7), without the need for literacy. The goal of the game is to drive a little robot called Cubetto back to his house. To accomplish the goal, children have to program the little robot using a limited set of physical instructions: forward, left, right and function. While the first three are rather intuitive, the last one calls a sub-routine, an extra line of instructions packed in a single command.

What was the development process and the rationale behind it?
Teaching programming to children is a widely debated topic. We are aware of a moderate number of solutions that try to accomplish this for children above the ages of 8. However, there aren’t many of these solutions suitable for younger children, and there aren’t any that work without a screen or without the need for literacy. We see an increasing number of Apps for tablets and computers that also work in combination with physical robots, but none of them are completely free from the pixel domain in the same way the Cubetto Play Set is.

Wood was chose as the main material, first of all because it’s natural; you get a warm feeling from it and it makes a nice sound. The second reason is cultural. Observations were conducted on games used in traditional kindergartens in Switzerland (where the product was originally designed) to discover that the games loved by children were all made out of wood.
Wooden toys are very durable and you can see marks and scratches on them, signs of their past usage from other children. It’s a material with memory. Wood was also chosen as a material because of the stark contrast it creates with technology. Inside of Cubetto there’s a circuit board, but we wanted to create a “magical” experience, hiding the complexity of the play set. 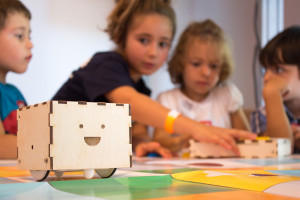 The concept behind the Cubetto Playset is heavily inspired by the work
of Seymour Papert, a mathematician who co-founded the MIT Artificial Intelligence Laboratory with Marvin Minsky, in the sixties (if you are interested in the subject, we encourage you to read Mindstorms, his most famous book). He was directing the team who invented LOGO, probably the most used and long lasting resource to teach programming to children. The goal of Seymour Papert was not just to teach code, but also to help children discover their own personal way of solving problems. Primo can be considered an extreme simplification of LOGO and the physical turtle. We limited the instructions, to their purest form, avoiding any kind of textual or numerical language.

At the beginning the robot was a toy car. A very complicated and time consuming shape to produce, as it’s a laser-cut shape glued together layer by layer, and subsequently sanded for over an hour.

The car had another major issue, it was very boy oriented. We wanted to avoid entering in discussions about ‘brain toy’ producers being criticised of only producing boy-oriented toys. We wanted to stay neutral, we didn’t want to create a toy specifically for boys or girls, and instead opted for a very neutral geometry, a box.
A name was given to the little box, along with a personality and a similey face, making it even more appealing for children. The robot is called Cubetto (little cube in Italian). The idea with Cubetto is also to create a basic module that can be expanded and customized easily in the future.

How can it be used with different aged children? 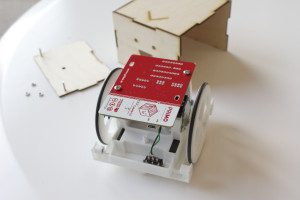 Out of the box it’s a great tool for children aged 4 to 7, they play and program a robot using colourful blocks. It’s a game, and it’s fun, they don’t really think about what they are learning. They don’t need a screen, and they don’t even need languages because there is no literacy involved, something important when considering multicultural environments. We tested this assumptions with workshops across Europe, the Middle East, the USA… it works the same no matter where you go. There is no learning curve, even for teachers, which is important considering that teachers sometimes shy away from the right products due to their inaccessibility. It differs from a Beebot for example, because the “coding” experience with the Cubetto Playset itself is tangible, and there is a direct reference between what the robot is performing and the instructions they gave Cubetto.

It becomes interesting for 7 to 12 year olds though, because the robot has been designed to be assembled and taken apart without any screws, using plug and play electronics. The robot by himself is essentially a Robot that anyone can build and code in minutes. A school that isn’t interested in the early years experience can just get the robot. It comes as a kit with a shell, a chassis, wheels, motors and a PCB that serves as Cubetto’s brain. The PCB is open source, and everything is based on simple plug and play electronics.

Children use scratch and Blockly to program the robot, and can just plug in a new sensor to change the behaviour of the robot, and even craft new creations and inventions. For 12+ year olds, people can simply purchase the Cubetto Board, which is a great prototyping platform for electronics, programmable with Arduino.

Activity ideas?
The out of the box experience for both the Playset and the Robot is quite intuitive. It’s based on free play, which is what we encourage. Show children how it works once, and let them go!

One thing we do is a cardboard robot workshop, where we get children walking around a grid dressed as Cubetto the Robot, while handing each other instruction blocks. This helps even super young children come to grips with Playset, and it’s also great fun.

Which computer science concepts can be taught using primo?
The Playset focuses on the queue of instructions. They can design, predict and write programs using the blocks. They can also easily debug by changing a block in the sequence. It’s simple and powerful. They can also learn recursions and negation using two special blocks we created. With the Robot by itself, there is basic robotics and physics.

Can schools use it as part of the curriculum?
Some schools already do, and we freely publish lesson plans that guide educators through the core concept mentioned above. It’s all available from our website:
http://primo.io

CodyRoby:Turning the Hour of Code into a DIY Unplugged Game