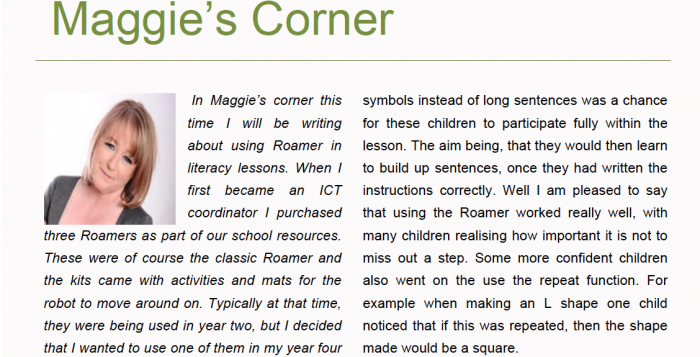 In Maggie’s corner this time I will be writing about using Roamer in literacy lessons. When I first became an ICT coordinator I purchased three Roamers as part of our school resources. These were of course the classic Roamer and the kits came with activities and mats for the robot to move around on. Typically at that time, they were being used in year two, but I decided that I wanted to use one of them in my year four class during a Literacy lesson. In particularly, teaching instruction writing. 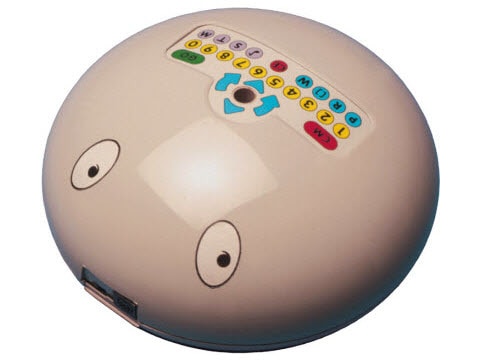 Most teachers are familiar with the frustration of getting children to write instructions without missing at least one or more steps in the process. As we all know if a step is missed out when programming a robot, then the action will not be carried out. I wanted to try out the Roamer to see if this would encourage the children to write instructions correctly. I also wanted to use the robot because the class that I was teaching at the time had a wide range of abilities along with many children who had English as a second language. Using signs and symbols instead of long sentences was a chance for these children to participate fully within the lesson. The aim being, that they would then learn to build up sentences, once they had written the instructions correctly. Well I am pleased to say that using the Roamer worked really well, with many children realising how important it is not to miss out a step. Some more confident children also went on the use the repeat function. For example when making an L shape one child noticed that if this was repeated, then the shape made would be a square.

Following the success of this work in a British school I wanted to see how this would work with children whose first language is not English and who are based in a school out of the UK.

During the academic year 2014/2015, Dave Catlin of Valiant Technology gave me a robot to use in a school I was teaching in in Moscow. This time I took the new ROAMER TOO; this robot is smaller and has additional features. 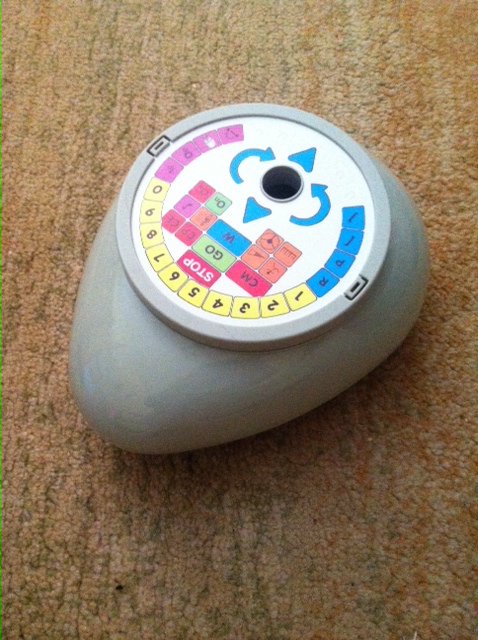 If you would like to find out more about the functions of this robot then check out Valiant Technologies Website http://www.valiant-technology.com/uk/pages/roamertoohome.php?cat=8&8

At the time, class teachers were being asked to cover ESL lessons. Most of the resources for these lessons were workbooks and I did not feel comfortable using these. Learning a new language should be engaging and workbooks like this didn’t inspire me and I should imagine they were unlikely to inspire the children. Therefore, I set about organising a short scheme of work for the children. 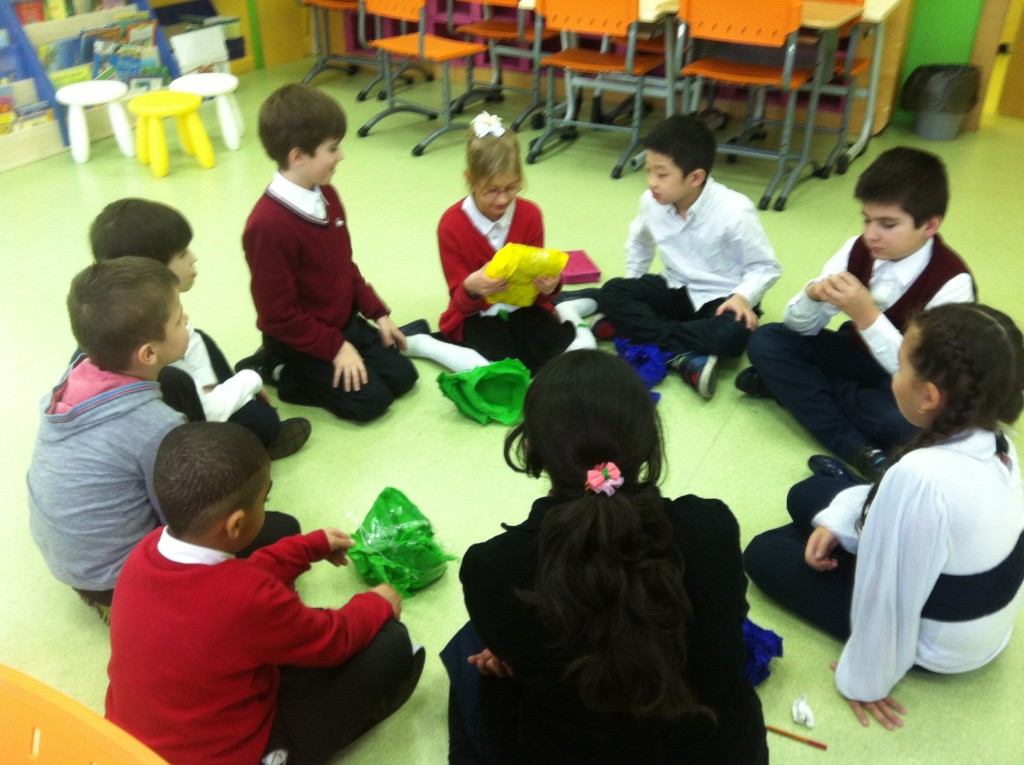 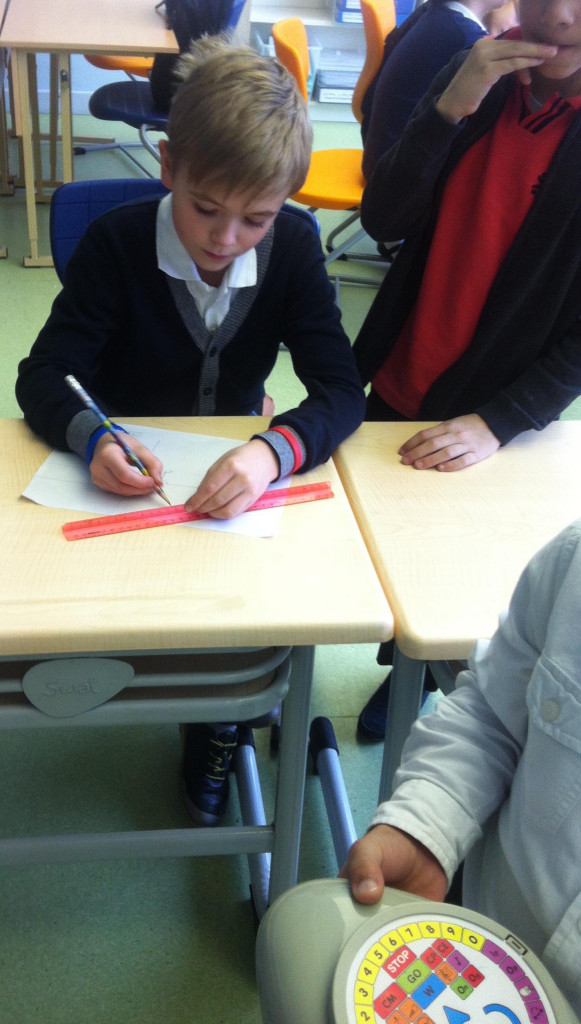 The lessons were approximately 40 minutes long, three times a week. The first few sessions involved getting to know how the robot worked, they were to draw out simple shapes starting with a straight line and moving on to an L shape with more confident children trying more challenging moves.

It is worth pointing out that I didn’t expect them to use any of the more complex features of the robot, the main aim was to motivate them to draw and write clear instructions. 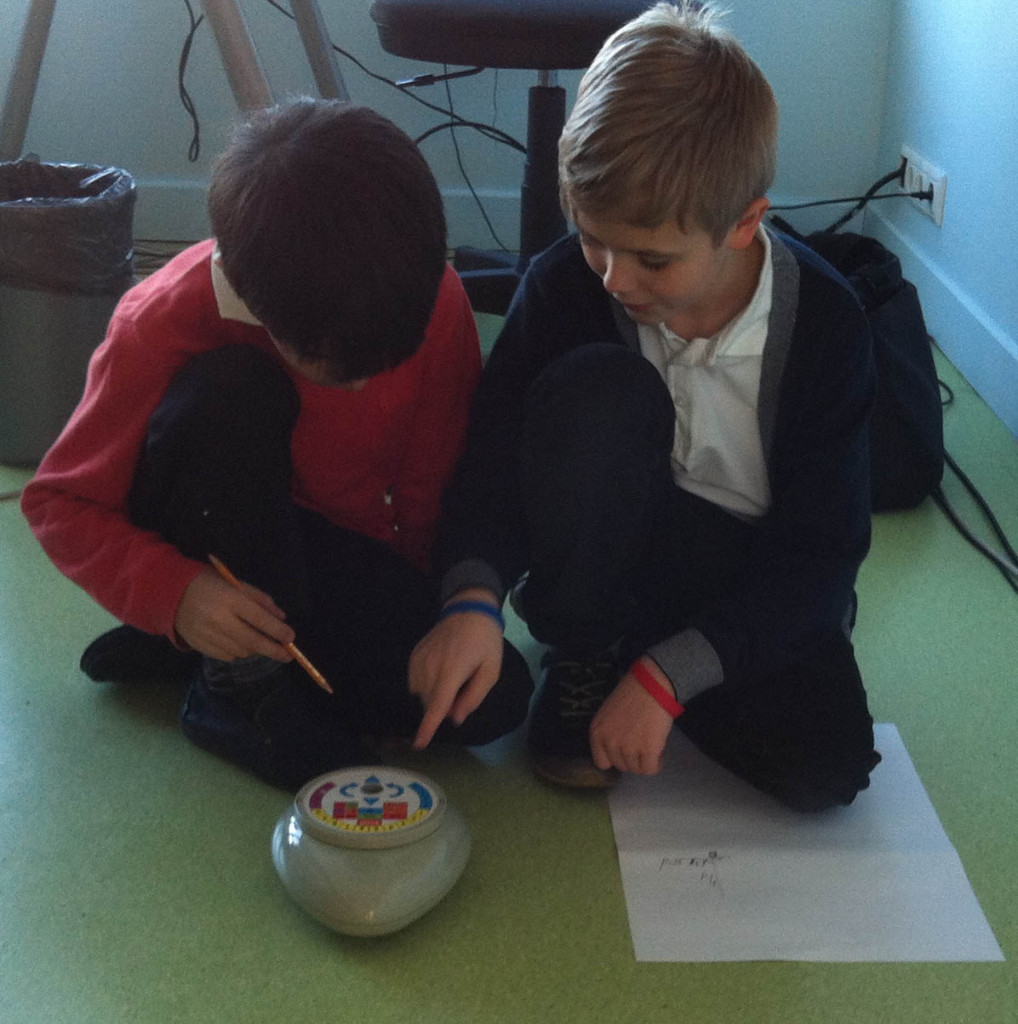 Once they had developed their confidence with the robot, I then moved on to introducing them how to write instructions, what they were for and gave them examples of different types of instruction writing. They had plenty of chances to redraft and refine their work and they eventually produced some very nice instruction booklets.

The young girl who did this work was not only new to English but also the Russian language and she had only arrived into the country in September 2014. 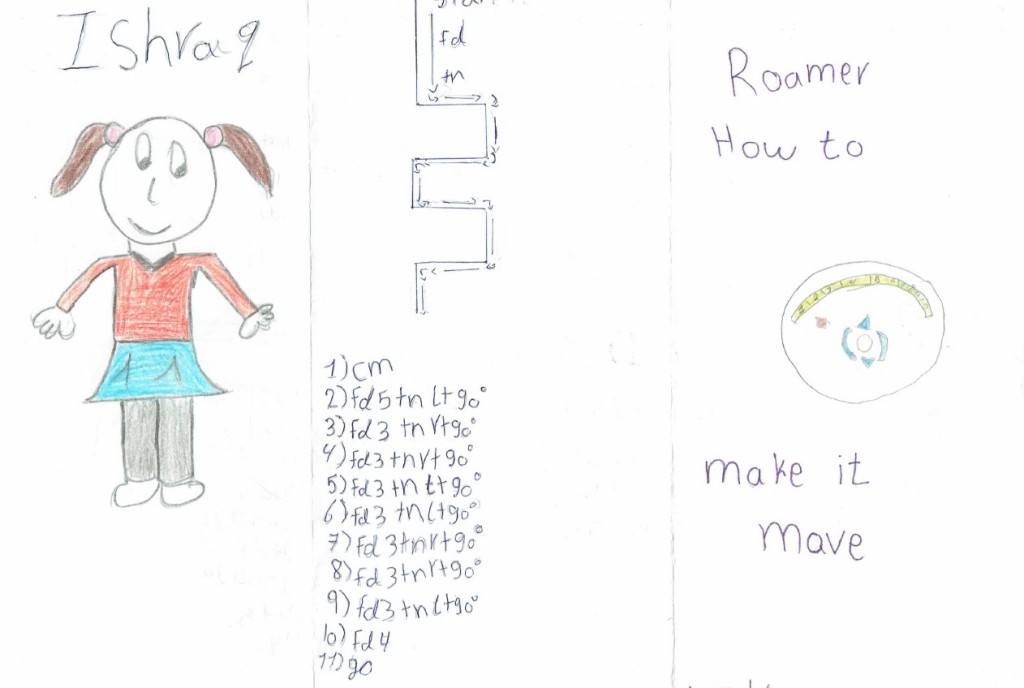 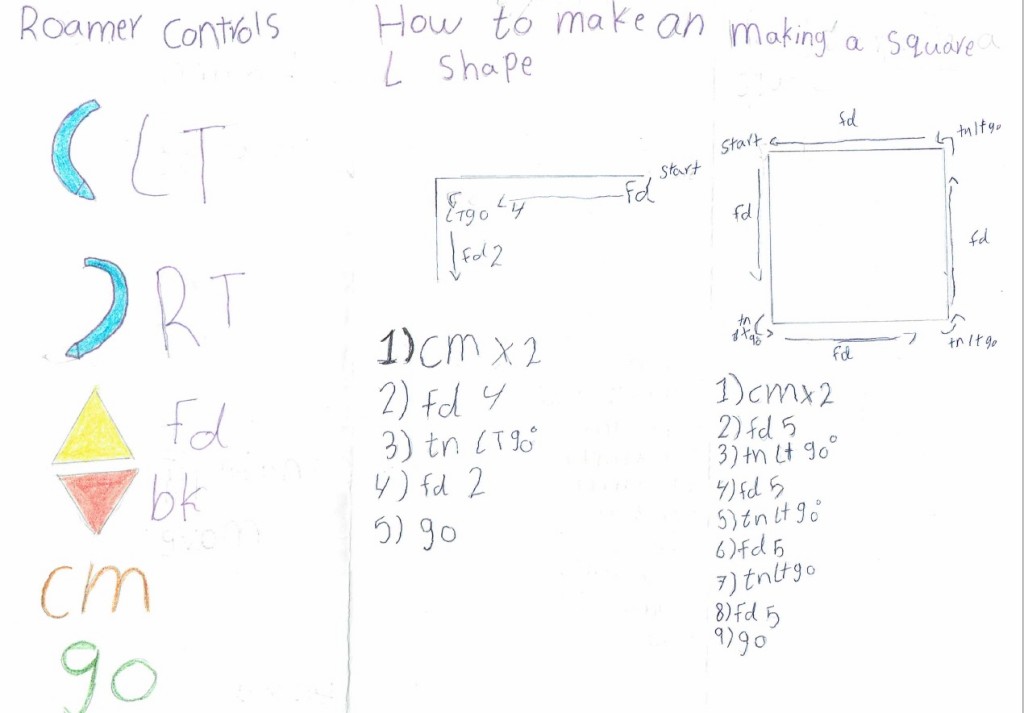 Following on from this work, I decided to introduce the children to explanations. Once again they were going to write about the robot and this time put some more detailed writing into their reports. I designed a short scheme of work to cover examples of explanations, the differences between them and instructions, as well as how to label diagrams.

Both units of work followed the style of the Literacy strategies with amendments for children whose first language is not English. Sessions took slightly longer; vocabulary needed was available on cards along with pictures to support the children. Having the Roamer to hand was also essential as they could then use this to go back and remind themselves about the key features of the Robot. 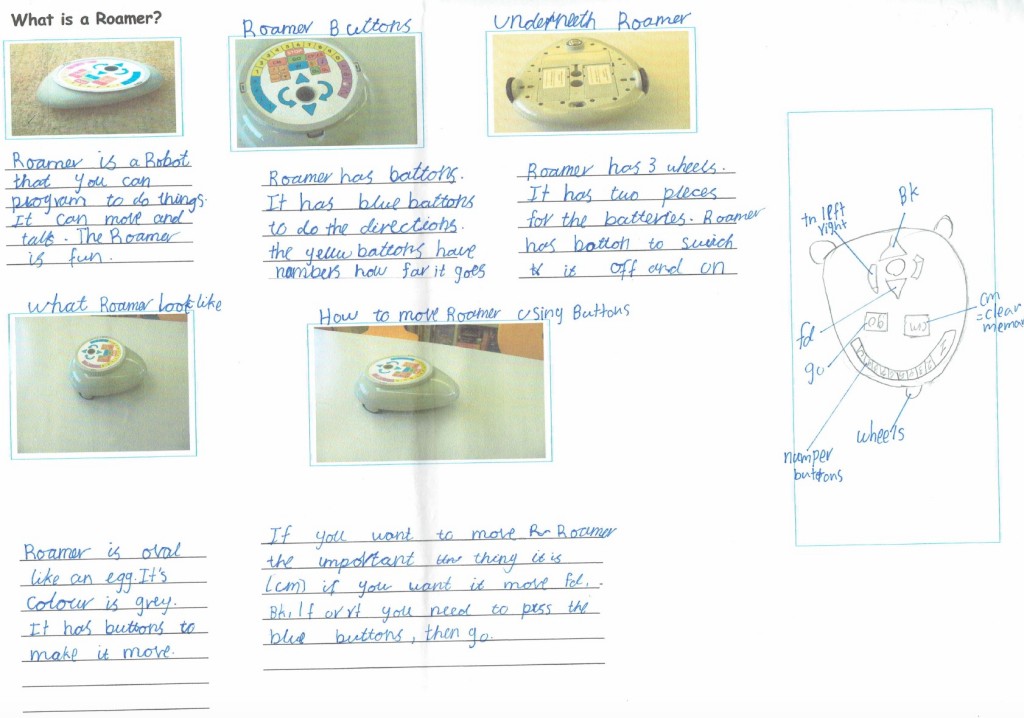 It was a lovely chance to show that it is possible to integrate computing into literacy lessons and I am sure similar types of robots and technology equipment could be used to help stimulate children’s writing. In addition to this, it was also good to see how a good stimulus with both language support and clear concrete objects could help children who are new to English, join in with the same lessons as their peers.

An outline of the schemes of work will be available over the summer from www.technologytoteach.co.uk and http://www.valiant-technology.com/uk/pages/roamertoohome.php?cat=8&8

I also believe that it is possible to use the ROAMER TOO with other writing genres. If we had had more time, I was going to get the children to write an adventure story with the robot as a main character. We have a lot of creative teachers out there and I am sure many could think of other types of writing that could be developed using a programmable robot as the main focus.

If anyone does try to do this, or any other work, it would be lovely to hear how you got on.

Surviving and Thriving with Computing as an NQT