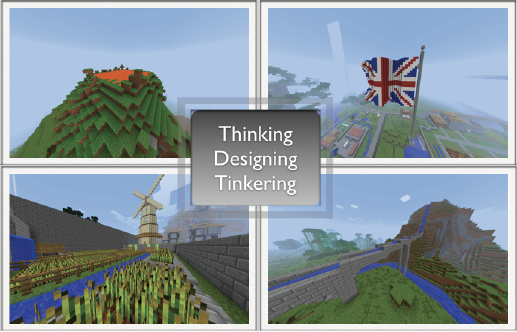 Just one more block…”, “If I just flatten this area and put this here I’ll…”, “I can build that in a few minutes…”. These are just some of the comments you’ll hear from someone lost in the vast worlds of Minecraft. Building colossal structures they’ve never seen before, landscaping whole valleys, mountains and forests, rerouting rivers and exploring deep caverns underground. It’s this level of freedom to create that makes Minecraft such an engaging platform for play. And it’s this engagement that makes Minecraft such a valuable learning tool.
I’m a huge fan of using Minecraft as a learning tool. To date it’s one of the most powerful games-based learning platforms I’ve found. It neatly fuses the engagement of gaming for pleasure with the elusive art of subliminal learning, a strategy sought after in so many ICT and games-based learning initiatives. I‘ve use Minecraft in many areas of education from primary to secondary; In after school clubs, with not-for-profit organisations such as libraries and museums, with businesses  and I‘m about to start work on a sizeable historical project reconstructing a famous Scottish town as part of the 2014 year of culture. I have taught elements of literacy, numeracy, science, art, design and technology, RME, computer science, primary topic work and much more using Minecraft and I work with educators around the world using Minecraft across a wide variety of curricula.

However, like all good tools for learning, Minecraft must only be used in the right situation and under the right circumstances. With forethought, planning and a clear, valid purpose. While It’s easy (and tempting) to use technology for the sake of using technology, it’s important to make the results of using Minecraft measurable.
Aligning the virtual tasks we undertake directly to our curriculum outcomes and experiences.

I note from some comments on Twitter recently that some people just don’t see the educational merit of Minecraft. I have carried out CPD on games-based learning in which a geography teacher has left desperate to install Minecraft while his/her history colleague sees no use for it. Education can never be a uniform system…on account of many elements, not least of all the pupils. So the more tools educators have, the better. Let Minecraft be just one of those. Not everyone will want to use it…just like podcasting, animation, cameras, some web 2.0 tools, e-journaling, blogging tools and more.

I recently built a learning environment using Minecraft specifically for teacher. From the basic functions of mining, crafting and building to applying the game’s mechanics to their own subject. Educators are offered free, in-game CPD with me using Skype. It’s been an interesting project with teachers from all over the world visiting; from the UK to South America, Europe, Scandinavia and as far as New Zealand (though lets face it…in an online context, that’s just a few milliseconds away).

Many have commented that Minecraft became infinitely more applicable after such a session (usually just one hour). Perhaps there is some weight here in the importance of training in the use of these kinds of tools? Time, space and funding for pioneering new ideas, technologies and pedagogies in the yearly allocation of training for staff? Larger risk, but I’m willing to bet there will be much larger rewards too. This in turn raises the question of why education is generally always way behind industry, commerce and home life in the application of technology? But that’s a whole other article.

It has been said that pupils will be put off by the regimentation of Minecraft in a learning environment, far from the freedoms they have outside of school. While Minecraft simulates the real world, the truth is, it isn’t real. Initially this strikes me as an accurate argument. After all, one of the main attractions of Minecraft is the sandbox environment and freedom within it to create anything you can imagine but within a set world to set rules. But if we look at this historically, in the realm of human development, this is how we flourish. Without some sense of order, law, rules, regulation, civility and such, there is only chaos. This is no different in Minecraft. Where I have left my own worlds open to this freedom we have experienced malicious destruction of our school constructions, the burning of our ‘Gruffalo Forest’, our in-game QR codes changed and so on. However, over time (and in some cases a very short time indeed) children begin to develop a sense of order, form rules, tasks, levels of acceptable behaviour. They police themselves, they plan and organise, allocate land, remove shoddy work and promote good work elsewhere. They make teams and work collaboratively or in healthy competition. It doesn’t take us as administrators or educators to do this!

If planned, managed and structured for learning and so, to some degree limited, Minecraft can prolong a pupil’s interest in the game and overall learning purpose. The beauty of Minecraft is the freedom we have to actually set rules, borders, challenges and problems. We used flooding and minefields in a recent project we undertook for a geography department exploring the displacement of population after a natural disaster or war. It was used to great effect to keep the pupils from growing bored of the freedom to go anywhere, do anything. Focusing their minds on the task in hand, the fear of that mine or the importance of the construction of flood defences before the imminent flood.

Dam from above before the flood.

Of course, giving them that freedom as a reward for completing challenges and maintaining the rules is a matter of ‘gamification’. Pupils were able to build a hugely elaborate settlement once they safely reached their chosen resettlement area.

One final point; if we strip away the subject specifics of curriculum learning. Assume we don’t need to meet outcomes or objectives or experiences in any given subject. The sheer wealth and quality of soft skills developed through the collaborative work encouraged by a tool such as Minecraft is astonishing.

Communication skills (in multiple languages where necessary), leadership, sharing, teamwork, organisation, time management, task management, decision-making, self and peer assessment and more. All willingly…or rather unwittingly given, as part of the experience. Music to any educator’s ears!

I am sure the Minecraft phenomenon will fade eventually as new games with ever more attractive mechanics are released (notice I didn’t say graphics). The games industry is changing rapidly towards a more interactive, ‘hack’, ‘mod’ and ‘build-your-own’ model. Lets just try to keep an open mind about all of the tools available to our educators. For now…I’m a fan of Minecraft as a tool for learning. Provided it’s the right tool for the job in hand!