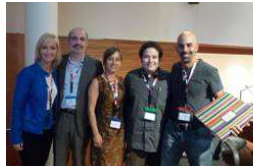 The European Conference on Game Based Learning is an academic conference that has been held annually in various European Universities since 2006. For the first time this year the Programme Committee, together with Segan (Serious Games Network, https://www.facebook.com/groups/segan/) decided to launch a competition at the conference for the best educational game. The aims of the competition were:

• To provide an opportunity for educational game designers and creators to participate in the conference and demonstrate their game design and development skills in an international competition;

• To provide an opportunity for GBL creators to peer-assess and peer-evaluate their games;

• To provide ECGBL attendees with engaging and best-practice games that showcase exemplary applications of GBL .

In the first instance prospective participants were asked to submit a 1000 word extended abstract giving an overview of the game itself, how it is positioned in terms of related work and what the unique education contribution is. We received 56 applications and these were reduced to 22 finalists who were invited to come to the conference to present their games. Four judges, in two teams assessed the games based on a comprehensive set of criteria including sections on learning outcomes, usability and socicultural aspects. A shortlist of 6 games were then revisited by all the judges during an open demonstration session at which conference participants were also welcome to participate. First, Second and Third place awards were given and two Highly Commended certificates were presented. The top three games were quite different in terms of the target audience and the format. 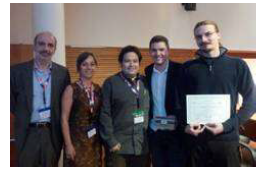 In third place was an app-based early learning game called Lipa Eggs developed by Ian Hook and Roman Hodek from Lipa Learning in the Czech Republic. This game was designed to help pre-school children with colour mixing and recognition and was delivered via a tablet. The gameplay takes the form of a graduated learning system which first allows children to develop the skills to play the game and then develops the learning process to encourage players to find new solutions.

More information about the game can be found at http://www.lipalearning.com/game/lipa-eggs 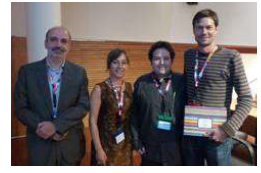 In second place was a non-digital game called ChemNerd developed by Jakob Thomas Holm from Sterskov Efterskole (a secondary school in Denmark specializing in game-based learning). This game was designed to help teach the periodic table to secondary school students and was presented as a multi-level card game. The game utilizes competition and face to face interaction between students to teach them complicated chemical theory over six phases beginning with a memory challenge and ending with a practical experiment. A video illustrating the game can been seen at http://youtu.be/XD6BPrJyxlc

The winner was a computer game called Mystery of Taiga River developed by Sasha Barab and Anna Arici from Arizona State University in the USA. The aim of the game was to teach ecological studies to secondary school students and was presented as a game-based immersive world where students become investigative reporters who had to investigate, learn and apply scientific concepts to solve applied problems in a virtual park and restore the health of the dying fish. A video of the game can be seen at http://gamesandimpact.org/taiga_river

Both competitors and conference participants said that they had enjoyed the opportunity of seeing applied educational game development from around the world and the intention is to make this an annual competition associated with the European Conference on Game-Based Learning (ECGBL). The conference in 2014 will be held in Berlin on 9-10 October and the call for games is now open. Details can be found here: http://academic-conferences.org/ecgbl/ecgbl2014/ecgbl14-call-papers.htm