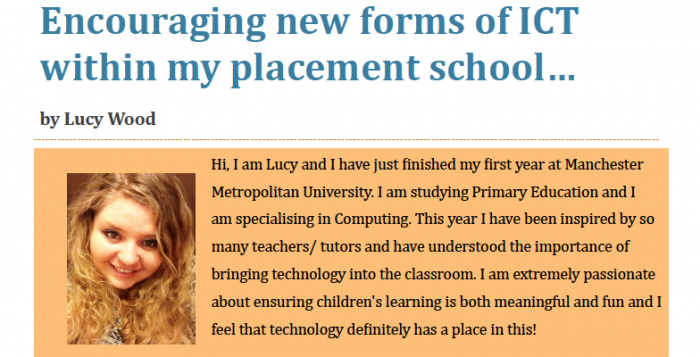 I have been at my current placement school since January. Working in a year 5 classroom I could see how engaged children were with technology and had a passion for playing games and using their iPads and consoles in their home environment. When thinking about what computing lessons I was going to teach during my block placement I decided to take a risk and ask my class teacher if I could show the children Scratch. From the first lesson the children loved learning about programming and creating their own projects and games. Other classes have started to use the software and children’s learning is becoming more fun!

From seeing the childrens “buzz” off this new topic of computing and learning new things during my computing specialism lessons (which can be found in my blog below) I decided to create a lunchtime club that showcased what had happened during the week/fortnight, in the format of a newspaper report. Using iMovie the children could act out the scenes and put the video sections together. I created an example video to show the children exactly what they would be doing and to encourage children to join my club. This proved successful as I then had all of year 5 and 6 wanting to participate so I had to rotate the groups weekly. I also had to have smaller groups as the school didn’t have iPads and I had to provide a couple whilst I was on placement there.

Firstly I taught the children the basics of iMovie before setting them off on their own tasks. 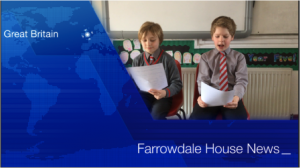 As I am a first year student I had never created a club before and didn’t know what to expect or what exactly to do. What was evident for me was setting rules! With my first group I didn’t do this (BIG MISTAKE!) and as they enjoyed my club, were having fun and saw this as downtime from lessons the children acted differently. It was clear that boundaries and the children creating their own rules was important for successful and proactive time.

As well as setting rules I also had a few other challenges! During lunchtimes I found it hard to find a space within the school that was not only quiet enough for filming but where other children wouldn’t disturb the session coming in and grabbing things or looking for a member of staff. But most of these things are expected within a school! Once a quiet space was found, it was then a challenge to ensure that all children were focused and on task whilst being silent if a few people were filming and others were script writing. Due to the circumstances of this being my placement school I also had to speak to members of staff about their children’s needs or personalities so that I could group them accordingly and ensure that I was supporting them correctly.

As the children were enjoying my club so much, I decided to link this in with my English topic where we were covering The Highwayman. As part of our second week on the topic the children discovered the class teacher and teaching assistant dead in the classroom, they were playing the parts of Bess and the Highwayman in our classroom crime scene. This became our stimulus for our film project after we watched and evaluated other KS2 Highwayman films. The children then came up with their own running order for their film, scripts, acting it out and editing it together. For this project I decided to bring in a green screen to show the children extra skills and how to edit things further within iMovie. The children were fascinated by this and our finished outcome was amazing. 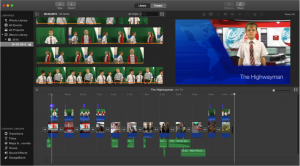 I believe that since being at my placement school I have been able to show them many new ways of incorporating ICT into the classroom. I have also been able to understand how these projects will work in a classroom and overcome challenges so that during future placements they can be more successful. One of the outcomes I am most pleased about is the PTA (parent teacher association) are hoping to raise money in order to provide iPads within the classroom environment.