Home Articles CodyRoby:Turning the Hour of Code into a DIY Unplugged Game 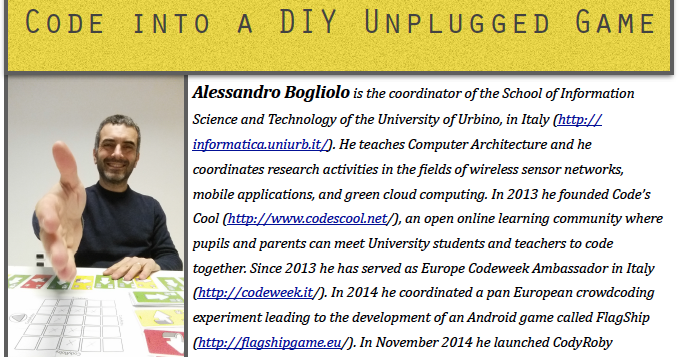 More than 90 millions people have tried an Hour of Code so far thanks to the playful massive open online course made available worldwide by Code.org. The Hour of Code is the most famous of the many cloud-based visual programming methods that have provided effective support to computer literacy campaigns targeting not only IT-gifted pupils, but neophytes of any age, regardless of their aptitudes and dreams.
Unplugged activities can further contribute to the diffusion of computational thinking, spatial reasoning and problem solving skills, lowering the access barriers in terms of age, infrastructures, and socio-economic conditions. This paper presents a method for organizing unplugged activities that retain the immediacy and effectiveness of the Hour of Code.

The method is called CodyRoby to emphasize that computer programming entails two roles: the role of Cody, a coder who provides instructions, and the role of Roby, a robot who executes them. At the beginning there are only three instructions: move forward, turn left, and turn right. Each instruction is represented by an arrow drawn on a playing card. While playing, Cody selects the cards to be passed to Roby, who moves on a chessboard accordingly. No equipment is required. Cody and Roby are just characters played by the players of the game. Having not only to write a code segment, but also to interpret and execute it, adds to the learning experience provided by CodyRoby with respect to its online counterpart.

Each card has the size typical of a playing card (about 1.97 x 2.76in) in order to be easily handled and packed in a deck. The instruction associated with the card is represented by the big arrow in the middle, while the two drawings in the upper part explain the effect of the instruction, showing the position of Roby on the chessboard before (to the left) and after (to the right) execution. The borders of the cards are shaped to suggest that they can be concatenated either vertically (top-down) or horizontally (from left to right) like pieces of a puzzle.

The DIY Starter Kit
The starter kit is freely available online (http://codeweek.it/cody-roby-en/diy-starter-kit/). It consists of 6 A4 pages to be printed out, cut out and folded in order to obtain a deck of 40 Cody cards, a card box, a folding chessboard that fits into the card box, and the Roby pieces to be placed on the board. A silent video tutorial is available that shows how to cut out and fold the kit (http://youtu.be/D5hQ9UTDQ6s).
Instead of using the kit, teachers could engage pupils in DIY activities aimed at the design of more creative Cody cards and pieces. 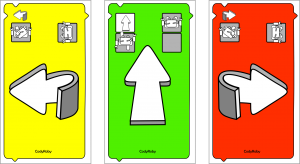 There are many unplugged games that can be played with CodyRoby. Some of them are described on the CodyRoby website, many mores will be posted soon. Hereafter I outline only two of them, that are particularly suited to experience the unplugged Hour of Code: The race and The tourist. 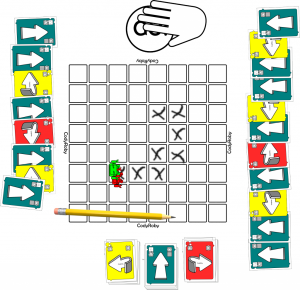 The Race is a board game for two players (or two teams) of any age. The players draw a random path across the chessboard by marking with a pencil all the squares along the path. The suggested path length is of 8 squares, that can be marked by the two players in turn (e.g., two at the time). Cells must be contiguous, i.e., any new cell must share an edge with the previous one.

The Roby pieces are placed at the beginning of the path and all the cody cards are placed at a side of the chessboard, separated by type into three decks to be easily found and picked up. When everything is ready, the players clap their hands and the game begins.

Each player (or team) has to take the cards from the side decks and to place them in sequence in from of her/him as fast as possible in such a way that the sequence of cards can drive Roby along the path. The player who finishes first presses the GO! button and tests her/his solution. This is done by moving the Roby piece along the path according to the instructions provided by the cards. The other player follows the test and tries to find an error or to think at a smarter solution (i.e., a solution which makes use of fewer cards). If the solution is correct and no shorter sequences are proposed by the other player, the fastest player wins. 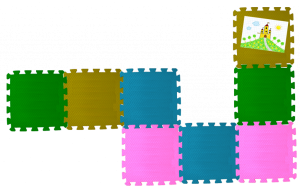 The Tourist is a spatial game for kids to be played by two teams. The game play is similar to The Race, with three main differences: i) it is played on the floor, ii) Roby pieces are replaced by a girl or boy playing the role of the tourist (an impartial referee possibly not belonging to the two teams), and iii) the path leads to the image (picture of drawing) of a monument.

Being a real-world spatial game, the path has to be drawn on the floor. The ideal material to be used to this purpose are puzzle play mats, but simple sheets of paper can also be used to compose the path.

As in The Race, the two teams start by composing a random path. This is done in turn by placing puzzle tiles (or sheets of paper) on the floor. Then a drawing representing a local monument (possibly drawn by the pupils) is placed at the end of the path, while the Tourist takes place at the beginning. Cody cards are divided by type into three decks placed on a school desk. The two teams work on two desks placed at the same distance from the main desk.
The game starts when the Tourist asks directions to the monument. The two teams have to run to get the cards they need and to put them in sequence to compose the directions. Then the cards are stacked up in a deck with the first instruction on the top. The team who finishes first provides the instruction stack to the Tourist who tests the solution following the instructions under the supervision of the other team. The fastest team wins if the solution is correct and no shorter solution is provided by the other team.
The Unplugged Hour for Code
The Hour of Code (http://hourofcode.com/) challenges online users to provide spatial instructions to a videogame character to help him/her find the correct path throughout a maze. There are 20 mazes of incremental difficulty. The first 5 mazes make use only of the three basic instructions, while the following ones introduce loops and conditional branches.

The unplugged hour of code consists of playing CodyRoby games using as paths the mazes proposed by Code.org. In particular, the first 5 mazes of the hour of code can be directly played with the starter kit on a 5×5 chessboard, as shown in the Figure. These 5 paths can be proposed as a warm-up activity before allowing pupils to design their own paths.

Cody cards representing Loops and Conditions will be released in February 2015.

E-Learning in a Biology Classroom