Home Articles Coding in the Second Dimension – Using Scratch to Learn About Exterior... 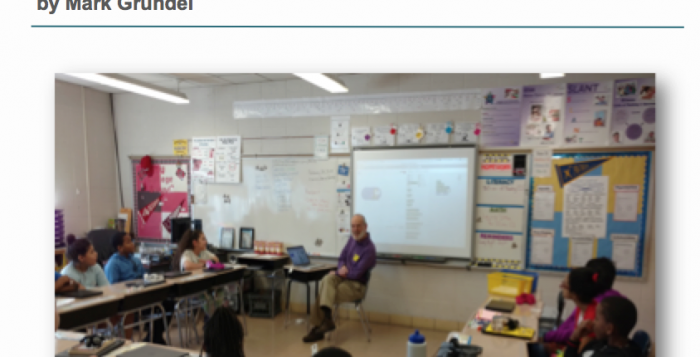 I originally used this lesson in conjunction with the Hour of Code week, where we invited retired Professor, Stephen Garland, from MIT into our classroom to learn about coding and computational thinking. At the time, we were studying decimals in mathematics and wanted to incorporate coding into our lesson design. This lesson achieved our initial goal of meeting the Common Core Standard: 5.NBT.A.2: Explain patterns in the number of zeros of the product when multiplying a number by powers of 10, and explain patterns in the placement of the decimal point when a decimal is multiplied or divided by a power of 10.

Our first task was to write simple code in Scratch that allowed the cat to draw a square. Through trial and error, we eventually discovered how to move the cat in a square like motion, but could not get the cat to draw, until we discovered the “Pen Down” block. 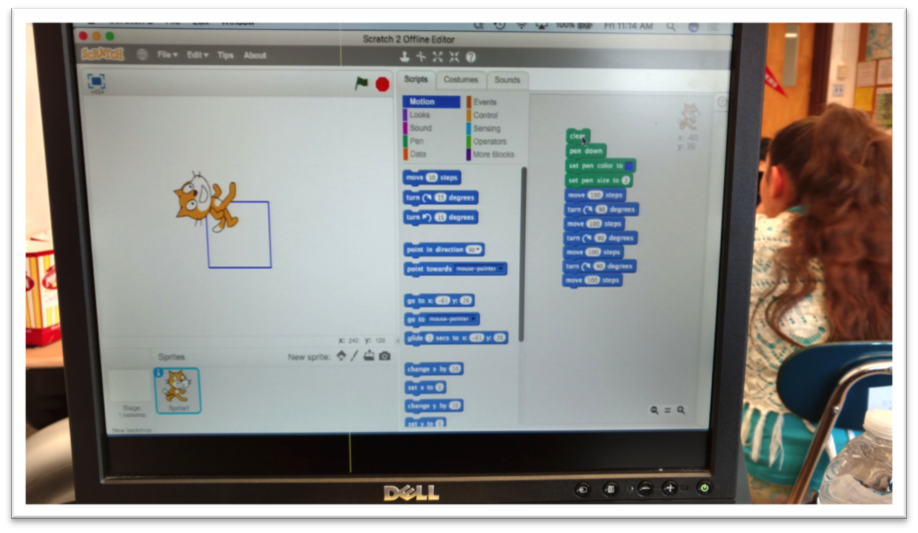 From there, we learned how to write our code more efficiently using loops, such as the repeat block. Some children broke the cat’s movements up into smaller components and added a costume change, for the cat to move in a more realistic manner. 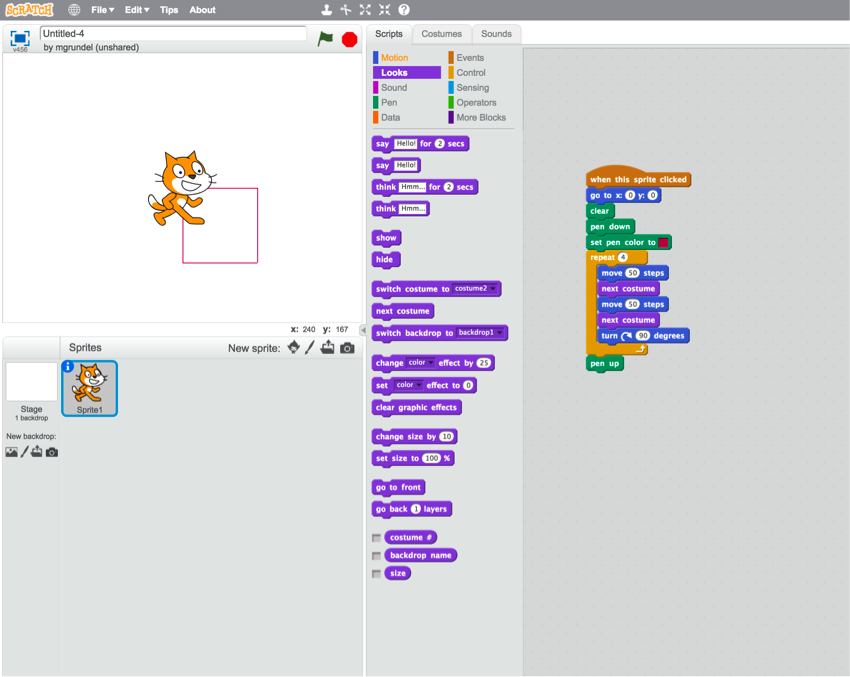 The next task for the students was to determine how to create a block, which would draw a square from a single block. This was accomplished using the “More Blocks” tab under “Scripts.” When making the block, students used the “Options” feature to add a number input. We called this number input “side,” but any name would work for this variable block. 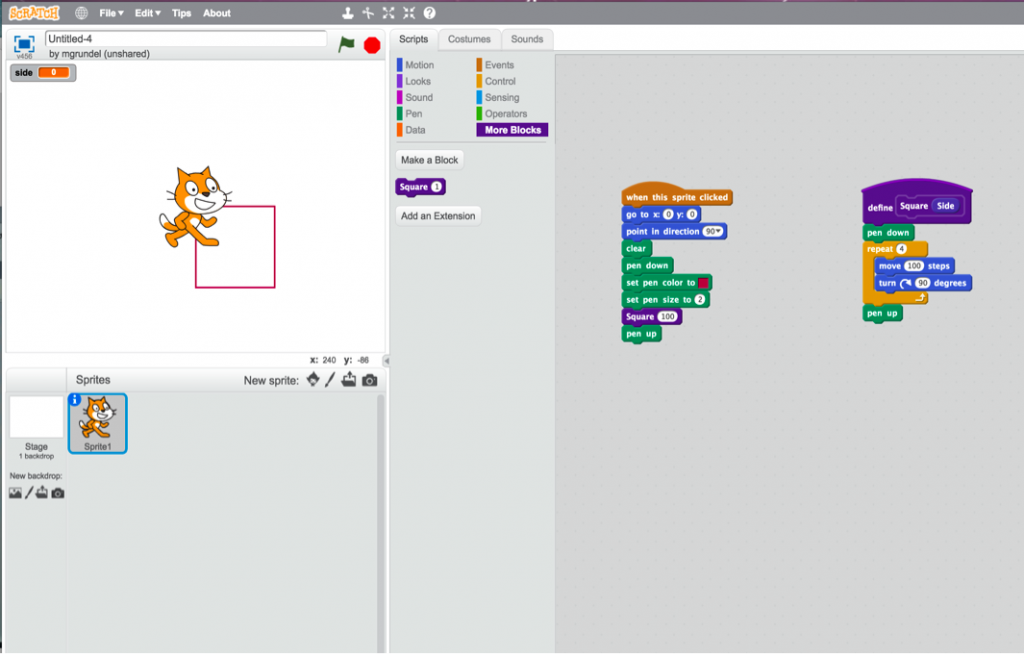 From here, students were tasked with various challenges, such as drawing repeating patterns and asked to discover how to create additional polygons, using what was already learned. The purpose of this challenge was for students to discover, through trial and error, that the sum of the angles must equal 360 degrees, to create a complete, regular polygon. Here are samples of repeating patterns with squares and hexagons. 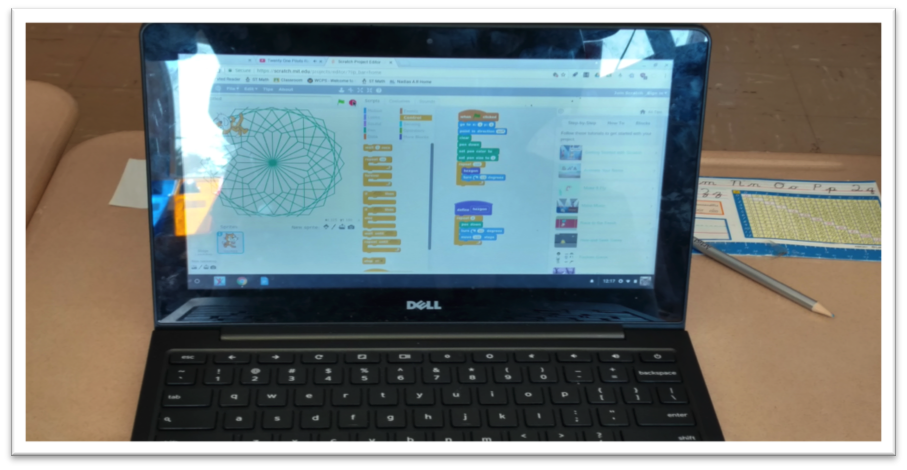 Children enjoyed the drawing aspect of the class, and without explicit instruction, could determine that then sum of the exterior angles must equal 360 degrees, to create a complete regular polygon. 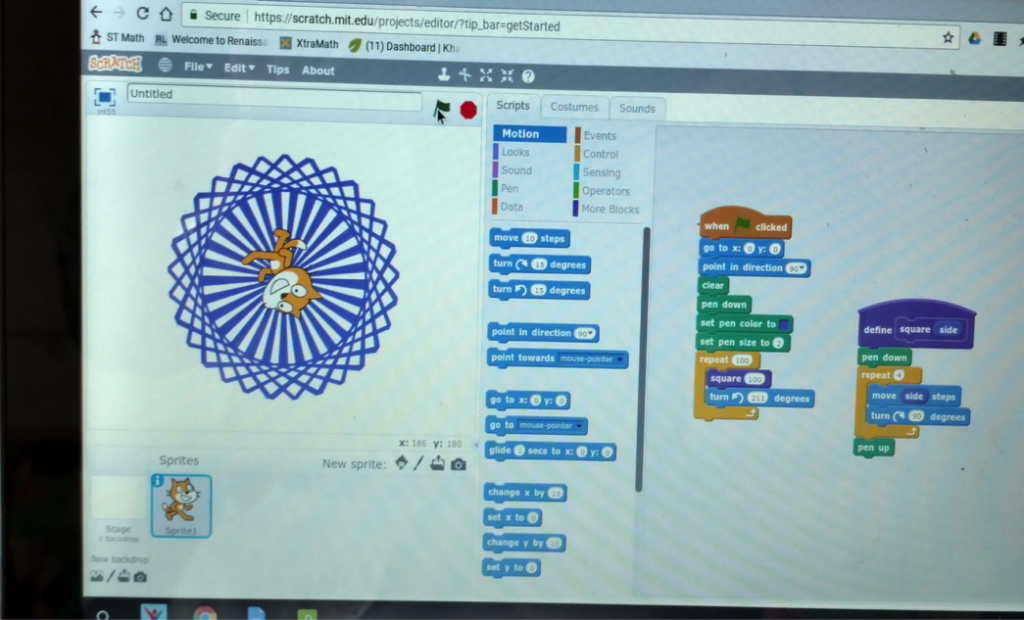 Our final task was to challenge students to create a circle using similar code in Scratch. Students worked collaboratively and discussed ideas excitedly. My ultimate goal was to have students use decimals and man steps to achieve a relatively accurate looking circle. Some early results created near circles, but there were also some misses. This proved very time consuming, but the children eventually refined their circles and were able to discover, on their own, the decimal relationship of powers of 10. 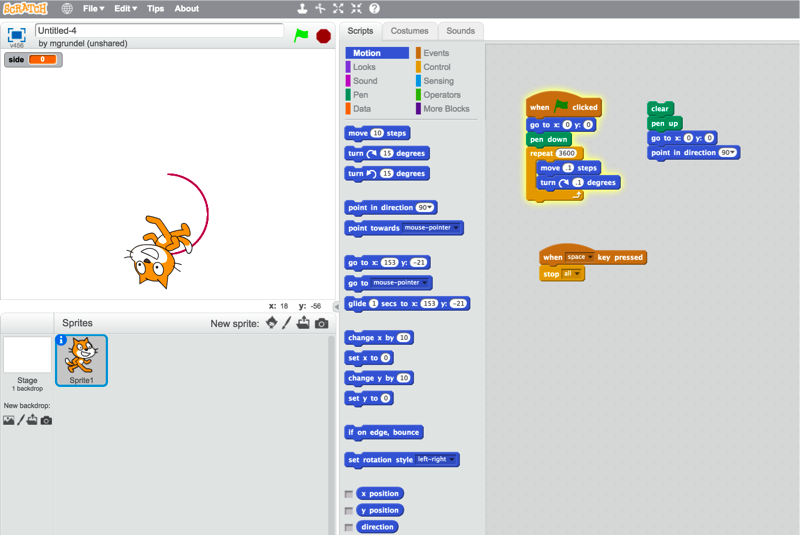 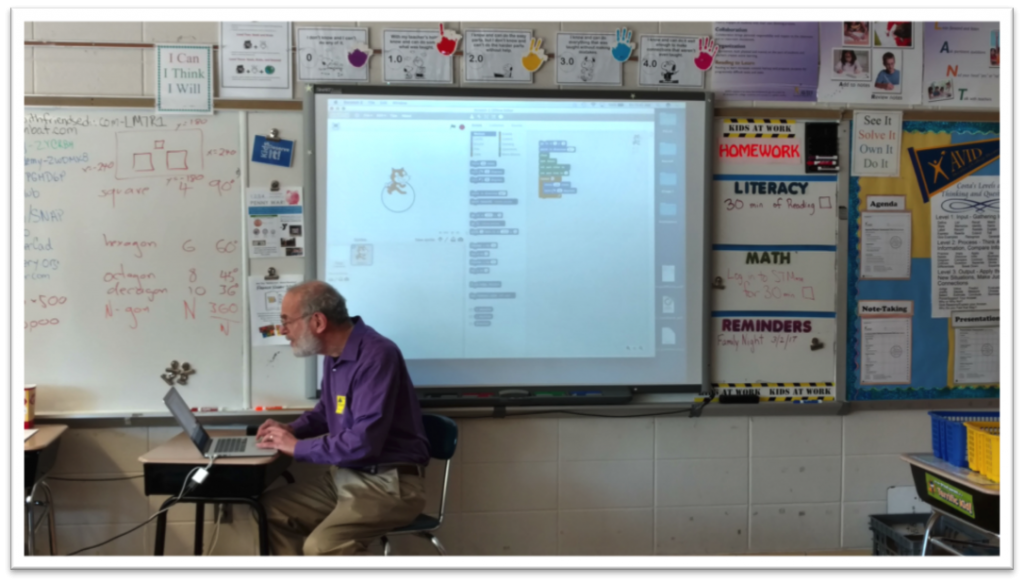 In the end, through hands on coding, I was able to assess learning and understanding of the standard through the completion of the students’ workspace in Scratch. However, the tasks and learning that took place beyond the standard, far exceeded 5.NBT.A.2; students worked collaboratively, hypothesized, tested ideas and iterated throughout the entire process. Students had to build their foundational knowledge of exterior angles to understand why they must rotate the cat a total of 360 degrees before they could create a complete circle. Students also gained a deeper knowledge of regular polygons, such as squares, hexagons, and many other shapes.

Finally, as the lesson ended, students added personal touches to their drawings, adding backgrounds and music, taking ownership of the projects. We said goodbye to Mr. Garland and hoped to invite him back to our 5th grade classroom shortly. Not only did we learn about angles, decimals, and block-based coding, but, we added a friend to our classroom community.

The power of filmmaking in the primary classroom