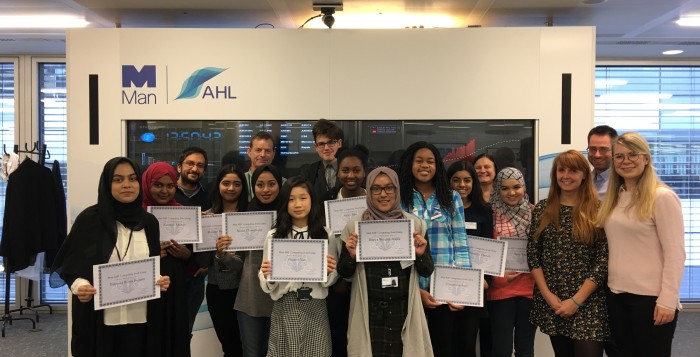 by Charlie Beeson and Angela Branaes

We had the pleasure of running a Code Camp here at Man AHL during CodeWeek EU. Working with NextTechGirls, 11 teenagers from Morpeth School, Haberdashers’ Aske’s School for Girls and St Albans Boys School got the opportunity to spend a week learning about technology, finance and office life.

The students got to learn about Agile Development methodology by taking part in our daily standups. By participating in an interactive trading game, they gained a basic understanding of the stock market, and they got an insight into the Man AHL Coder Prize, an annual coding competition we run here at Man AHL for students aged 16-25 from across the EU. We are looking forward to receiving their algorithmic solutions to this year’s HiveMinder competition! 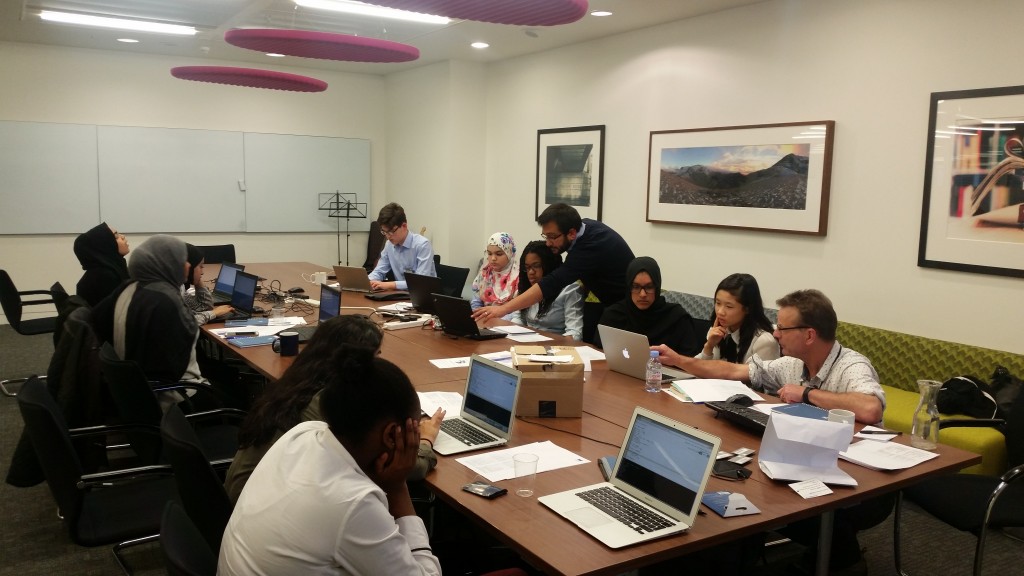 During the week the students had the opportunity to submit questions to an anonymous Q&A ballot box. We were very impressed with what they asked; “why can’t computers program themselves?” and “what are the biggest threats to the Internet?”. We also provided explanations of buzzwords from the media such as “The Cloud”, “Artificial Intelligence”, “Machine Learning” and “Big Data”.

The majority of the week was spent teaching the teenagers how to program in Python, how to test their code, and how to make a great website they could show their friends, using javascript, html and css. The teaching workflow was streamlined using PythonAnywhere’s student/teacher mode, allowing us to easily push lesson code to all the students’ laptops. Most of the students had no prior programming experience, so we started gently; progressing from a session of “thinking like a robot” to creating some pseudo-code, to a fully coded anagram solving function in Python. This eventually evolved into scrabble word solving.

We introduced them to algorithms; using a dictionary to demonstrate binary search and playing cards for sorting, culminating with giant letters to come up with an anagram solving function. We were very impressed at how well they all solved the challenge!  Once the students had a good understanding of the scrabble anagram, we went on to code it up using a Test Driven Development approach. This made sense to them as they could then write code to make each of their examples pass, which mirrored the way they had come up with the algorithm in the first place, and enabled them to more confidently make changes to improve their code. 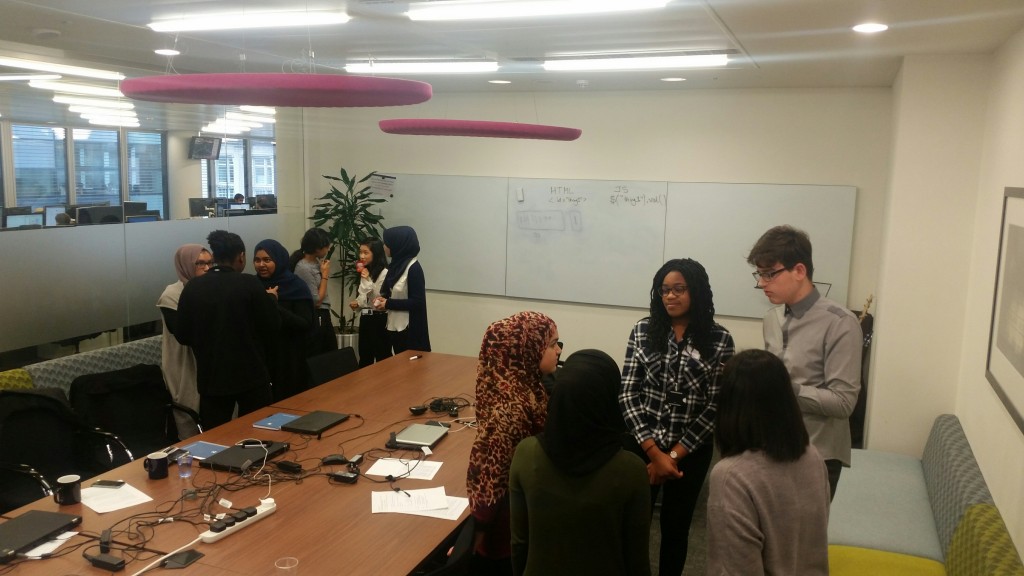 These lessons served to give them an understanding of how Python programming worked, and what a function and an algorithm were. The approach of demonstrating a code snippet on a big screen and then giving them time to play around with it on their own seemed to work really well. It was very interesting teaching them about functions and variables, as the explanations that made them grasp them varied wildly. It was also long enough since any of us learned programming that we had forgotten that functions might be a difficult concept to grasp initially! Some understood it through parallels with maths functions, whilst others found the concept of it being a re-usable box the easiest to grasp. By the time we reached the web programming sessions in the latter half of the week, students had mastered a fundamental understanding of how Python, functions and variables worked, and had fully functioning code.

The first web session started with a brief 20-minute lecture on how clients and servers talk to each other, and how HTML, JavaScript and Python fit together for this purpose, before diving in with the practical work. Despite these lectures being laid out to have a large amount of learn-by-example and walkthroughs of the tasks, the students needed more help than anticipated here. This was largely because we had not allocated sufficient time earlier in the week to cover all the basics. We should have spent more than 20 minutes explaining how a website works, how HTML, JavaScript and Python fit together, and should have dedicated some time to explaining the differences between Python and JavaScript. One of the most confusing concepts, which we hadn’t even registered in the planning phase, was brackets vs indentation. These are all recognised as difficult concepts for beginners to learn, something we had forgotten in our eagerness to teach them a lot of cool tech knowledge. We were therefore incredibly impressed at how quickly they picked up Python programming and web development, and how well they got on with making their websites. They particularly enjoyed the CSS part towards the end, and decorated their websites with funky colours, pictures and additional end-to-end functionality, practically without any help from us. It was thrilling to see them all getting stuck in by themselves.

At the end of the week we ran a retrospective with the teenagers. We were slightly worried that not much would come of this, as they had all been a bit shy during the week, but it worked fantastically. We uncovered a lot of things that they had really enjoyed, and some things they wished we had done differently. A good balance between what went well and what needed work was struck by requiring 3 good and 3 improvement points from each student.

Thanks to the retrospective we know that the next time we run the Code Camp we will ensure that we put more ice-breaker tasks early on in the week, and spend more time explaining fundamental concepts of how and why things work the way they do. It was great to see all of the students speaking up and asking questions by the end of the week, we really saw their confidence grow. We will definitely run the anagrams and the web sessions again, as everyone felt like they learned a lot from these, and had a lot of fun making something they could take home to show their friends. They also found it interesting to take part in our stand ups, and really enjoyed our office atmosphere.

My favourite session was the introduction to python programming as well as the overall anagram project as it provided me a lot of information on coding, moreover it was extremely fun and interesting. – Foosim Van (14), Morpeth School

Last but not least, did we succeed in inspiring some of the teenagers to continue exploring technology? After we held a talk about studying computer science at university, several of the students wanted to know more about the subject, and are now thinking of applying. When asked if they would continue working on their websites after the Code Camp was over, the majority overwhelmingly said yes. Most of them also said they would like to continue learning more about the languages they were taught during the Code Camp week at Man AHL. A fun and educational week was had by everyone involved. We are already looking forward to next year!

This information is communicated by AHL Partners LLP (“Man AHL”) which is registered in England and Wales at Riverbank House, 2 Swan Lane, London, EC4R 3AD, authorised and regulated in the UK by the Financial Conduct Authority. Compliance reference: P/16/1771/GL/R/O

Is technology your best friend in the classroom? by Vini Bance

HOW TO ADAPT YOUR WHOLE SCHOOL ICT CURRICULUM