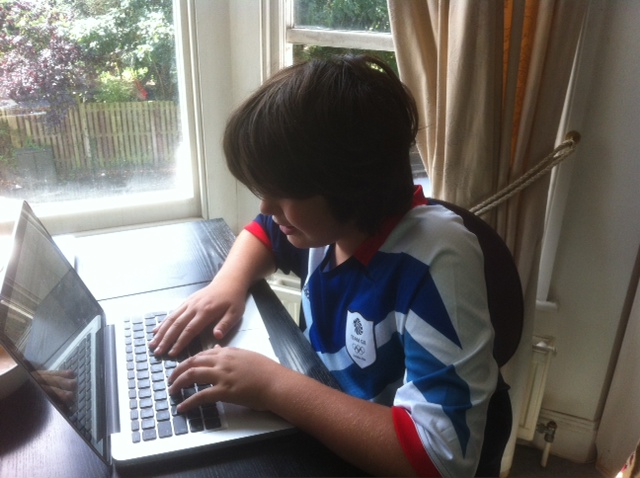 Macbook in the classroom

In a large, busy primary school, despite an allocated ICT time and a well-devised timetable, “There’s someone in the ICT room” is a phrase dreaded by any impulsive teacher. So what to do if the ICT suite is occupied? Laptops!

A sigh of relief? Or beads of sweat upon the brow? As with everything, it depends on the teacher.

Some fear the temptation of a laptop in front of an inquisitive child, will be too much and those little fingers will be itching to find an online game just as the teacher launches into a complex explanation. However the logical solution, which is not always so obvious, is to take advantage of the mobility of a laptop and simply close the lid until they are ready to be used.

Not all problems are as easily rectified, such as the loss of wi–fi signal (an often occurrence!) Shock! Horror! Those beads of sweat are turning more into a stream now. Trying the good old “turn it off and turn it on again” approach has bought us a few minutes but “the browser is not connected to the internet” is still putting a spanner in the works. It is then the blessed words “Shall I work with someone else?” saves the day. Spanner averted! The logic of a child can sometimes evade you in the panic of the situation.

Laptops are the perfect accompaniment for a group project, which gives the teacher the freedom when it comes to seating arrangements. It helps the children assign roles to each other, scan texts, make notes and work as a team- skills that are necessary for the future. Of course there is an occasional quarrel over whose turn it is to type, but that’s when teacher steps in.  A final worry for some is that the excitement of using the laptops, the thrill of the whole world being at their fingertips will be too much for the children and they might deviate during the lesson from the lesson’s activity (just as your head teacher or heaven forbid an Ofsted inspector is walking past). This is exactly why having laptops so readily available is such an advantage.

We’re integrating technology into their every day lives. In this day and age, where technology has become almost compulsory, using laptops and the like, will become as second nature as using a pen, and as we, their teachers, are preparing them for the future what better way than exposing them to something imperative for their future success.